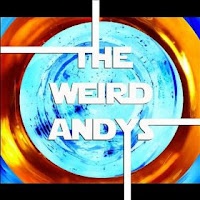 From Knoxville, Tennessee, The Weird Andys are a four-piece garage band with bluesy and acid rock nuances and plenty of hard rocking chops. None of them are called Andy – shame. So that’s the bare bones of it, but there’s plenty of interesting detail to fill in the gaps.

They’re partial to turning their guitars up, and when they reference Hendrix and his heavy psychedelic guitar squall, we understand precisely what they’re driving at. They mix in a little feral Americana, for some context, together with whatever rhythm they see fit, and their resulting noise is always appealing, on one level or another. They’re some decent songs, too. The album kicks off with “Pavement Pound”, a lovely, grungy storm of a song, with some delicate post-punk strings providing guidance. Both guitarists / vocalists Matt Hensley and Josh Brown show what fine musicians they are, and whoever it is taking lead vocal, also does himself proud.

Other songs of special note are “In the Know” which pleasingly combines late ‘70s punk and something that crawled out of Seattle in the mid ’80s, “Slow Train” is less urgent – there’s a clue somewhere in the title – but still rocks gloriously, and last track “Friends”, which gallops along with a rhythm that Gang Of Four would happily call their own.
www.facebook.com/theweirdandys
www.reverbnation.com/theweirdandys
Simon M.