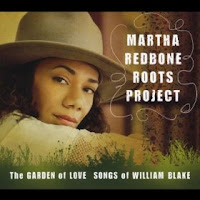 Although “The Garden Of Love: Songs of William Blake” is Martha Redbone’s third album, she considers it “a sonic rebirth and fuller flowering of her own rootsy ethos”. It’s easy to understand Redbone’s thought process. William Blake was an 18th century visionary. An acclaimed poet and artist, an idealist, free thinker and republican, an advocate of free love and a scourge of organized religion. That’s a heady mix for a man born in the 1750s, in pre-industrial London, and it’s his words that Redbone has chosen to sing. No wonder they instill feelings of liberation and rebirth.

Upon listening to the album for the first time, it’s fascinating to hear how contemporary it sounds. Blake may have written his poems over 200 years ago, but Redbone has placed them in a thoroughly modern Appalachian folk setting – if that’s not an oxymoron. The Nitty Gritty Dirt Band’s John McEuen produced the recordings, and he’s done quite a job. The sound is splendid; warm, energized and inclusive, and Redbone is in fine voice; passionate and when the material requires it, sensitive and gentle. I’m sure it will be filed away under folk, but it’s soulful and infused with gospel, and transcends simple genre classification.

They begin with the barnstorming title track, a shadowy, backwoods reading, which places the garden on the swampier side of the tracks. “On Anothers Sorrow” is equally intense, though the simple arrangement relies utterly on Redbone’s outstanding vocals, and “A Dream” reflects its English roots until a flute and Seminole chants break the spell. It makes for a wonderful juxtaposition, and provides just one of many standout moments on this exceptional record.
www.martharedbone.com
www.facebook.com/Martha-Redbone
www.martharedbonerootsproject.bandcamp.com
Rob F.