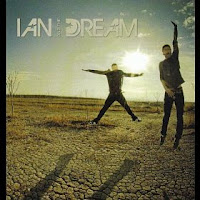 Ian & The Dream is Ian Ash on lead vocals, guitar, keyboards and drums, and Chivo on bass and vocals. They got together in 2008 specifically to compete for a major label contract at Bodog’s Battle Of The Bands competition. They walked away with the title of ‘Best Milwaukee Band’, and earned themselves some attention-grabbing shows, including a Beach Boys support slot.

Their higher profile brought them to the attention of Grammy winning producer Stephen Short, who recognised their songwriting talents and the musicianship to deliver results. Their debut release harks back to a time when attributes such as these really mattered, and Short’s expectations have been fulfilled, with interest.

If we must give a name to what they do, then power-pop is as good as any, and it’s exemplified by opening cut “We Know How to Fall”. It’s beautifully produced, contemporary, guitar-based pop, and punches its way out of the speakers. “Breathe” is less lively but what a fantastic one-two combination of choppy guitars and killer chorus. “Radio Blastin’” is begging to be taken out for a ride – windows down, of course – and “Honesty” brings the seven tracks to classy, serene halt.

They’re obviously in awe of the great pop-rock bands of the ‘60s and ‘70s, all the usual suspects, together with bands like Crowded House and Jellyfish. To bring things reasonably up to date, I’m sure fans of The Feeling and the Gallagher brothers will find much here to enjoy.
www.ianandthedream.com
www.facebook.com/IanAndTheDream
www.ianandthedream.bandcamp.com
Rob F.