Review: Henry The Archer – The Castle’s On Fire

Henry The Archer – The Castle’s On Fire (Independent) 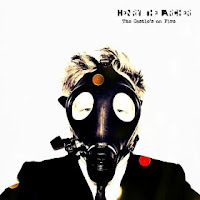 The Internet is a beautiful, weird, wonderful place where we can learn about combustion engines, read short stories about Chinese hitmen and peruse pictures of ladies who have mislaid their undergarments, but don’t seem at all embarrassed by their situation. Unfortunately, it has let itself down in one minor regard, and that’s providing serious biographical information for Henry The Archer. I can just about confirm that Henry is one man, a singer-songwriter, composer, producer and performer and “The Castle’s On Fire” was recorded with Derril Sellers on bass and drummer James P Brady lll. They seem to play most of their gigs around the northeast of the USA and New York in particular, which helps place them if nothing else, but of course, listening to the record reveals the details that matter.

Influenced by contemporary groups like Wilco and The Black Keys, they mix hard urban Americana with soul-flecked modern rock styles to create a sound that feels fresh and distinctive. The vocals seem treated with the same device that made the early Tarnation records so startling, and the result is a collection that has a timeless quality yet is completely current. A little disconcerting perhaps, but all the same, irrefutably pleasing. Launch track “Nightmares” sets out their stall. A simple – though urgent – guitar, bass, drum setting allows plenty of space for Henry to sing his song, an unsettling subject giving way to solid hooks and bathtime-friendly humability. “From Across the Room” is altogether more exotic, and the tweaked vocals and jerked rhythm gives it a post-punk, late ‘70s feel. “A Ghost Called Regret” veers of into delicate folk-pop territory, and is quite lovely, and best of all, “Why Can't You Hear Me?” is custom built for a cult movie. Its White Stripes buzz and noirish tone needs to be heard in a David Lynch flight of fancy. Perhaps Nicholas Cage should be in shot, though it’s probably best sorting out the finer points at a later date.
www.henrythearcher.com
www.facebook.com/HenrytheArcher
www.henrythearcher.bandcamp.com
Rob F.