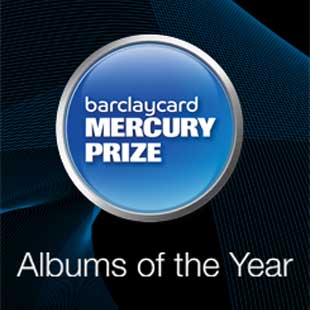 Plan B, Alt-J and The Maccabees lead the nominees for this year's Barclaycard Mercury Prize.

Eight of this year's albums are debut releases, with Richard Hawley the only artist to have been nominated for the prize before.

Plan B, aka writer, director and actor Ben Drew, is the most recognisable name on the list, having scored several top 10 hits from soul-tinged 2010 album The Defamation Of Strickland Banks.

His hard-hitting hip-hop record Ill Manors accompanies his film of the same name - a tale of life on the streets of London - and he is already joint favourite with Hawley to win the prize.

It went to number one in its first week of release in July and the rapper is aware such success could hinder his chances of winning the prize.

"Probably, but it's good enough to be part of this," said Drew after the nominations were revealed. "My name's on this list, this album and what this album represents. UK hip-hop is on this list."

Only two women made the cut in Lianne La Havas and Jessie Ware, who performed at Wednesday night's nominations launch in London.

"I just wanted to make something that I would love in 10 years and still be proud of when maybe there isn't a music career," she said of her R&B influenced debut Devotion.

Fellow nominees The Maccabees have tipped Ware to win, not least because they are old friends.

Guitarist Felix White said: "It's kind of bizarre. I'm just so happy that the girl I knew when I was 12, who said she wanted to be a singer, is here now. It's just a really beautiful thing."

The Maccabees are nominated for their third album, Given to the Wild, which took a while to sink in despite the record' s critical acclaim and top five chart position.

"It wasn't until we were outside and we were let in that we knew for sure. Hugo was saying 'there's no way that people can take it back now!'," revealed singer Orlando Weeks.

"We've got a really early flight to Boston, we just don't want to miss that - but I think this warrants a little bit of celebration."

Kiwanuka said he had followed the Mercury Prize as a teenager.

"I love albums and I worked hard to try and really make an album," he told the BBC.

"The way we listen to music now, it's difficult sometimes to hear a piece of work as an album and this gives people the opportunity to do that, so it's such cool news."

Several heavily tipped records failed to make the list, including Kate Bush's 50 Words For Snow and Florence + The Machine's Ceremonials.

The shortlist's more esoteric choices include Roller Trio, dubbed "the new sound of British jazz" and folk artist Sam Lee, who sourced a lot of his music from the gypsy traveller community.

"I think I'm privileged that I'm not in competition with anybody," said Lee. "If I win, I win on account of being different. If I just stay as one of the nominees then I'm there as a justified member of a group of would-bes."

Along with Django Django, who said it was "amazing" to feature on such a "brilliant list", Alt-J's experimental art-rock has also been heavily tipped to take the prize.

In a statement sent from New York, drummer Thom Green said it felt "very surreal": "I want people to know if there's anything you want to do just go out and do it. That's basically what I did, do what you want and do what you love," he said.

Chairman of the judging panel Simon Frith said the shortlist "showcases a wonderful variety of musical voices, emotions and ambitions".

This year, Channel 4 takes over coverage of the event from the BBC and will broadcast the ceremony, featuring live performances from each of the nominees, from its new home at Camden's Roundhouse.

The four-year agreement also includes a series of intimate Album of the Year Live gigs around London from the 12 shortlisted acts.