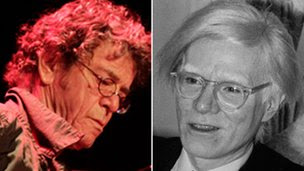 US rock band The Velvet Underground have had a copyright claim over their iconic Andy Warhol-designed album cover dismissed by a federal judge.

The group accused The Andy Warhol Foundation of copyright infringement, saying it illegally licensed the famous banana logo for use on other products.

A trademark claim by the band can still go ahead.

The judge said on Friday said The Warhol Foundation's agreement not to sue for copyright infringement over The Velvet Underground's use of the image meant there was no copyright dispute for her to resolve.

She dismissed that claim without prejudice, which means it could be brought before the court again.

Clifford James, a lawyer for The Velvet Underground, said the band disagreed with the ruling and believes it will win its trademark claim.

A trademark can protect an image for commercial use.

Joshua Paul, a lawyer for The Andy Warhol Foundation, declined to comment.

Warhol served as the manager and producer of the band, which was formed by Lou Reed and John Cale in the mid-1960s.

He designed their first album cover, which incorporated the banana symbol and the phrase "peel slowly and see".

On early editions of the album, the banana skin was a sticker which could be removed to display the flesh underneath.

Legal papers filed in Manhattan in January stated that the artwork, which was never officially copyrighted, "became a symbol, truly an icon, of The Velvet Underground" for some 25 years.

The band accused The Warhol Foundation of trying to "deceive the public" into thinking they had given their "sponsorship or approval" to a number of products - including iPad covers and accessories - that now carry the image.

The acclaimed album, which featured German singer Nico as a co-vocalist, contained such tracks as I'm Waiting for the Man, Venus in Furs and Heroin.

It was added to the US National Recording Registry by the Library of Congress in 2006.

Although they sold poorly at the time, The Velvet Underground have come to be considered one of the most influential groups of the 1960s.

Various artists, including David Bowie and REM, have admitted to being inspired by them.