Review: Dave Hoffsommer – Playing With Myself

Dave Hoffsommer – Playing With Myself (Independent) 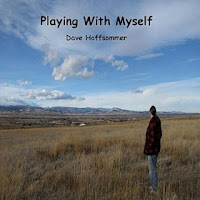 New Jersey singer-songwriter Dave Hoffsommer will be a new name to most of you, though some of you maybe aware of his old band, the PreCambrian Rabbits. Their demise provided the motivation for Hoffsommer to write and record his debut solo album.

From what I can ascertain, and there’s probably a clue in the title, “Playing With Myself” is a genuine solo effort. Things are kept pretty simple throughout its 14 tracks, with guitars dominating, though drums and bass make occasional appearances. Above all the album is a showcase for Hoffsommer’s songwriting and musicianship, and he makes good use of the opportunity, though interestingly, the first track that makes the listener sit up and take note is a version of the traditional standard “I Know You Rider”. It’s a song that’s been recorded many times since it was discovered in the ‘30s, though perhaps it’s the multitude of Grateful Dead live versions that will be most familiar. Hoffsommer’s take is also recorded live, and is slow and gentle, and quite restrained. Almost lo-fi, it’s no less enjoyable for that.

Instrumentals litter the collection. Tracks like “Blind Side” and “No One Home (Uninhabited Man)” indicate a prowess on both the acoustic and electric guitars, and musically he’s just a good when he brings along a song to sing, though he’s no great vocalist and the production is decidedly limited. Still, there’s much to like and I’m looking forward to hearing what he comes up with next.
www.davehoffsommer.com
Rob F.