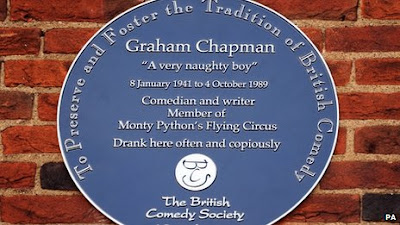 Monty Python stars descended on a pub in north London to raise a glass to the life of a "very naughty boy".

Michael Palin and Terry Jones were celebrating fellow Python star Graham Chapman's life at the unveiling of a plaque to the comedian.

The memorial to the comic, who died from cancer in 1989, was held at his "manor" - the Angel Pub in Highgate.

The plaque references Mr Chapman's role in the Life of Brian and says that he "drank here often and copiously".

It was organised by the comic's family and friends after budget cuts forced English Heritage to abandon its official plaque. 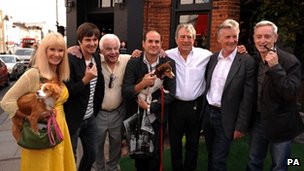 Comedians and former colleagues Barry Cryer and Carol Cleveland were also there to celebrate Mr Chapman.

Mr Palin said: "This was Graham's manor and Graham was a lovely guy.

"I spent many happy times with him, most of which I forget. This was where he was and we used to come up here to see him.

"Highgate was his patch and he should be celebrated because he was a very good, brilliant, funny, nice, wise, kind man, who occasionally drank too much."

He said he believed Mr Chapman would have been pleased that so many of his friends had turned out to celebrate his life.

"I think he'd be suitably impressed that we all came along. He would have stroked his sideburns a bit as he was known to do. I think he would have approved."

Mr Cryer described Chapman as "one of my best mates".

"I think the pub is the perfect place to put the plaque. Very Graham, very silly."

Mr Chapman's life and times will be the basis of the forthcoming film A Liar's Autobiography - The Untrue Story Of Monty Python's Graham Chapman.

Based on his book, it stars the man himself through audio recordings.

The animated film brings the comic together with fellow Pythons Palin, Jones, John Cleese and Terry Gilliam for the first time in 23 years.