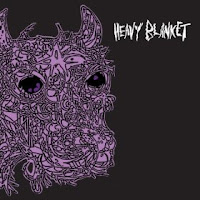 The biography of Heavy Blanket begins way back in 1984 when teenager J Mascis wanted to take a new direction away from what he was doing with hardcore outfit, Deep Wound. Teaming up with a couple of stoner school friends, Johnny Pancake and Pete Cougar - who brought with them the influence of hard Japanese Psych – Heavy Blanket was born. Their aim was to slow things down and get much louder than their contemporaries. Johnny then had a head injury, which appears to have rendered him recluse, and Pete ended up in prison for passing counterfeit cash, all before any serious recording happened.

Come 2011 a chance meeting between Mascis and Johnny at a ski resort (where Johnny explained that Pearl jam were to blame for his earlier accident!) the two agreed to reform the band. Searching Ohio prison records they found Pete, secured permission from his parole officer, and Pete brought with him the only original Heavy Blanket recording, from a practice session.

Some 27 years after inception Heavy Blanket revisit their 6-song repertoire and their ambitions are finally realised. The mid-to-lengthy instrumentals see Mascis’ elaborately sharp and molten guitar wigouts circle around the nice-n-heavy rhythm section. Whilst the tunes hold their own, music history has had its share of noise rock explorers over the intervening period, so unfortunately they’re not as novel as they might have been in 1984.
www.outerbatteryrecords.com
Willsk