EMI-Universal deal cleared by EU and US regulators 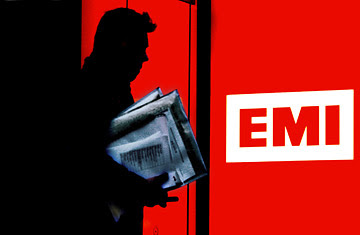 EU and US regulators have approved the takeover of UK music firm EMI by Universal Music, but it must sell some of the firm's most valuable labels.

The European Commission said Universal would have to sell off assets including the Parlophone label, home to artists such as Pink Floyd and Kylie Minogue.

The US Federal Trade Commission later approved the deal in its turn without imposing any conditions.
The £1.2bn ($1.9bn) takeover of EMI was announced in November.

Although the European Commission said its ruling would allay competition fears, rival music labels have condemned the move.

EMI, with a history dating back to 1897, is home to artists including the Beatles and Pink Floyd. Universal is a unit of French media giant Vivendi.

"The very significant commitments proposed by Universal will ensure that competition in the music industry is preserved and that European consumers continue to enjoy all its benefits," EU competition commissioner Joaquin Almunia said in a statement.

He said a combined group would have a market share with the European Union of less than 40%, the threshold which typically prompts regulators worry about market dominance.

"In this investigation, we have paid close attention to digital innovation, which is changing the way that people listen to music."

Citigroup is selling EMI, having bought it when buyout firm Terra Firma defaulted on loans owed to the US investment bank. Regulators have already allowed a group led by Sony to buy EMI's music publishing arm for $2.2bn.

Universal welcomed the commission's decision, saying: "Today's approval brings to an end an extensive EU regulatory review and the acquisition will benefit the artistic community and music industry."

The company said that after the asset sales, its catalogue would include the Beatles, Beach Boys, Genesis, Katy Perry, Emeli Sande and Robbie Williams. The Beatles, part of Parlophone, was exempted from the sale.

A source close to Universal said the company had already received interest in the assets for sale from well-funded potential buyers.

Smaller rival music labels reacted angrily to the commission's decision. Impala, which represents independent label across Europe, claimed that the commission's conclusions acknowledged that "Universal's power is a problem across the whole market".

Helen Smith, executive chair of Impala, said: "This decision has finally put a freeze on Universal's ability to expand further and sets a benchmark for constraining abusive behaviour across the whole market.

"Following the approval of the Sony/EMI merger, however, this decision nonetheless reinforces what is already a powerful duopoly. Contrary to the basic principles of competition in cultural markets, artists and consumers will ultimately pay the price."

Martin Mills, chairman of Beggars Group, said: "It's good to see that the Commission has seen this deal as such a threat to the market that it has demanded and received truly swingeing commitments to divestments.

"However, that should not conceal that fact that Universal's arrogance has paid off for them, that they have destroyed a significant competitor, and that even with these divestments their ability to dominate and control the market has reached even more unacceptable levels.

"Anyone trying to start a new digital service will be realising that very soon, and we will continue to look to the regulators to monitor ongoing behaviour."