Review: Xpress – Brothers From Other Mothers

Xpress – Brothers From Other Mothers (Independent) 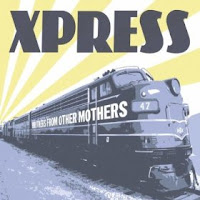 Xpress are a four-piece blues band from Maryland, led by vocalist-songwriter-harmonica player Howard Herrnstadt. He calls himself Harmonica Blu, which is as good a name as any for a bluesman, and although it emphasises his instrumental dexterity, his voice is just as good. The rest of the band, Dave Myre (guitar), James Cookie Cooke (bass) and Randy Pittman (drums), bring a wealth of experience and a rock solid groove to the proceedings.

Although a blues band at their core, there are plenty of other stimuli at play, and a quick read of an online biography reveals names like Miles Davis, Bob Dylan and Mark Knopfler. In fact, it’s the Dire Straits man’s influence that’s most detectable on opening cut “You Can't Spend Your Money in Hell”, a tale of drug dependency and degradation, brought to life with some unpretentious and unfussy musicianship, with special mention for guitarist, Myre.

“You Only Want to Dance Alone” and “Long Tone Blues” are much closer to fulfilling the blues brief, the latter a striking instrumental with an addictive rhythmic kick. “Only for the Memories” and “Trouble With a T” expose their jazz leanings, which they instill with a noir-esque, filmic quality. Perhaps my favourite of the bunch is their “Down In Baltimore / Mystery Train” medley. Again Myre is on top form, and the two songs, though quite different, seem to hang together like old friends – not unlike brothers from another mother…
www.harmonicabluxpress.com
www.facebook.com/HarmonicaBlu
Rob F.