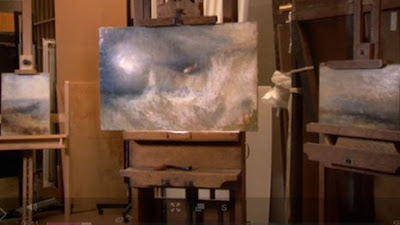 Three oil paintings deemed fakes and locked away for half a century have been found to be genuine works by landscape artist JMW Turner.

The oils were left to the National Museum Wales in 1951 by Gwendoline and Margaret Davies of Llandinam, Powys, but discounted in 1956.

Curator Beth McIntyre said the works had "gone from being worth thousands to being worth millions".

After new forensic examinations the paintings will go on show in Cardiff.

"It's wonderful," said Ms McIntyre, curator of prints and drawings at the National Museum. "It's one of those things that you always want to happen."

Ms McIntyre said she first noticed the paintings - The Beacon Light, Off Margate and Margate Jetty - when she joined the museum 10 years ago.

"Visually I could never understand why they had been deemed not to be Turners," she said.

She said five of six paintings bequeathed by the Davies sisters in 1951 - one came later - were examined by Turner experts in 1956, considered not to be by him and taken off display.

"Off Margate and Margate Jetty were deemed wrong," explained Ms McIntyre. "The Beacon Light was said to feature rudimentary beginnings by Turner overpainted by another artist, to the extent that it was not a Turner."

A new investigation was begun, this time using more modern methods, to reassess the veracity of the paintings.

In a process featured in the BBC One programme Fake or Fortune, the original locations of the scenes depicted were revisited, and X-ray, infra red and pigment analysis was undertaken on the canvasses.

The result of the investigation was that Turner expert Martin Butlin, who had previously dismissed the paintings, was moved to alter his opinion.

"We do occasionally change our minds when we have the right evidence," he told the programme.

The artworks were among a collection built up in the early years of the 20th Century by the Davies sisters, who were among the biggest benefactors to the world of public art in Wales.

Ms McIntyre said she was glad for the two sisters that the veracity of the paintings had been reconsidered.

"To have this blip in their collecting history was a shame and it's nice to prove that they were right; that these were Turner paintings," she said.

Although the paintings' value has rocketed, Ms McIntyre said they could never be sold.

"They are part of the national collection for people to come and appreciate," she said.

All seven Turner paintings bequeathed to the gallery will go on show at the National Museum Cardiff from Tuesday.

London-born Joseph Mallord William Turner, who became known as "the painter of light", died in 1851.