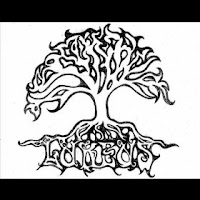 American singer-songwriter Lukeus Adams was born in Utah, but is now settled in Portland, Oregon where he’s been releasing his music since 2002, slowly but surely finding a substantial local following. “Samples” should see him broaden his audience. His songwriting style and presentation might best be described as alternative folk, as it’s very much song-centred, with just an acoustic or electric guitar providing primary backing. The musicianship is bright and clear, but it’s Lukeus’ voice that chiefly catches the ear. Its cracked, weathered tone seems to reflect a 100 years of hard living, and it drips a sad and soulful intent.

The collection gets off to a fine start with “Shining Sun”, a tasteful psychedelic folk song with simple but wholly effective strumming keeping things structured and accessible. “Everyone Has One” saunters along like a fractured, broken version of Lou Reed’s “Kicks”, though the subject matter bears no similarity whatsoever – perhaps it’s just a related rolling rhythm and shared sense of turmoil. Over these seven songs he rarely takes a misstep. For those who require a safe, easy comparison, think early Devendra Banhart or the pre-electric Tyrannosaurus Rex. Whether Lukeus will be able to build on “Samples” and take his music in new, strange directions, I’ve no idea, but while there’s an album available with the above songs, and others like “Some Times” and “Soul of Rhythm”, the future can take care of itself.
www.lukeus.co
www.facebook.com/Lukeus
www.lukeus.bandcamp.com/samples
Rob F.