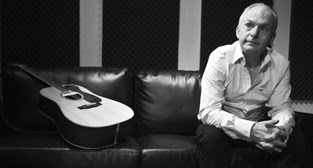 Leicester Bangs: Tell us a little about yourself.
Louis: I am 54 years old, born in Toronto, Canada.
My heritage is Acadia, from Prince Edward Island, Canada. I have been playing guitar since I was 14 years old and used my music to soothe my own soul through tough times in my life.
I started performing in a Piano Room at a well-established restaurant just north of Toronto last September, 2010. I started singing then, also, and I soon had fans enjoying my style of playing - I was surprised (laughs).

LB: How did you start out making music?
Louis: I started writing songs when I was 17 yrs old - some are on my first CD. I’m often asked what kind of music I play? I always answer; it depends on the mood of the lyrics and the mood I was in when I compose a song. Although, I do like playing instrumentals...

LB: Who did you grow up listening to and how do they influence what you’re doing now?
Louis: Bob Dylan, Cat Stevens, Chris Rea, Mark Knopfler, Johnny Winters, Johnny Cash – the list is endless.

LB: Tell us about your latest release.
Louis: My latest released CD is called "Keepin' it, re...all" - a double meaning.
Some hope, reality and small messages of life in itself…

LB: Do you get out and play your music live, and if so, what can an audience expect at one of your shows?
Louis: I have played some small events but I haven’t started performing yet. If I do perform, I will give the audience the mood of my songs as written.

LB: What aspects of playing and recording music do you most enjoy?
Louis: My composed and written songs go across well. Generally the mood that I’m in, or a set mood, will generate the type of music played, and many songs can be played in a different mood set.

LB: Where can people find (and buy) your music?
Louis: Itunes and Amazon. My name will link you to my CDs (links below).
www.louisgallant.com