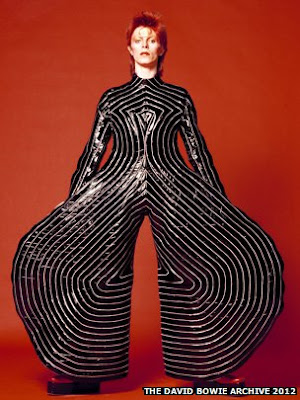 An exhibition charting the career of British singer David Bowie will open at the V&A in London in March.

The Victoria and Albert has been given unprecedented access to the David Bowie Archive to curate what will be his first international retrospective.

The "David Bowie is" exhibition will feature handwritten lyrics, original costumes and set designs alongside the 65-year-old star's own instruments.

The V&A said it would explore Bowie as a musical innovator and cultural icon.

More than 60 stage costumes will be on display, including original Ziggy Stardust bodysuits from 1972 and outfits designed for his Aladdin Sane and Thin White Duke characters.

Other exhibits include the Union Jack coat designed by Bowie and Alexander McQueen for the Earthling album cover in 1997.

"His radical innovations across music, theatre, fashion and style still resound today in design and visual culture and he continues to inspire artists and designers throughout the world."

It is the first time a museum has been given access to the David Bowie Archive. Last week, however, Bowie released a statement denying he had been involved in curating the event.

"Contrary to recently published reports relating to the announcement by the V&A of an upcoming David Bowie Exhibition, I am not a co-curator and did not participate in any decisions relating to the exhibition," he said.

"The David Bowie Archive gave unprecedented access to the V&A and [the] museum's curators have made all curatorial and design choices.

"A close friend of mine tells me that I am neither 'devastated', 'heartbroken' nor 'uncontrollably furious' by this news item."

The exhibition will offer insight into the artist's early years, tracing the first musical steps of David Robert Jones before he officially adopted the stage name David Bowie in 1965.

It will feature Bowie's first major hit Space Oddity, which coincided with the first moon landing in 1969 and introduced fictional character Major Tom.

Previously unseen tour footage, set designs and storyboards from the lavishly produced 1974 Diamond Dogs tour will also be on display.

Alongside these will be more personal items such as handwritten set lists, musical scores, word collages and diary entries.

Bowie's innovative approach to creating albums and touring shows centred around fictionalised stage personas, with 1972 marking the birth of his most famous creation Ziggy Stardust - a human manifestation of an alien being.

Ziggy's androgynous and otherworldly appearance had a powerful influence on pop culture and signalled a challenge of social traditions.

Recently uncovered footage of the artist performing Jean Genie on Top of the Pops in 1973 will also form part of the exhibition, to run from 23 March to 28 July.