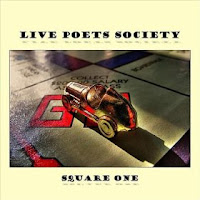 Live Poets Society is singer-songwriter-guitarist JeeWee Donkers and keyboardist-flutist Peter Holen, and on their debut record, drummer Frank Schuuring and bass player Rob Weenink have joined them. They remind me of a clutch of late ‘70s groups who appeared the same time as the new wave broke, but who seemed to have evolved from a classic pop tradition rather than punk. Groups like The Korgis and New Musik spring to mind, and Live Poets Society share a talent for strong tunes and songs that stick around long after they’re finished. Also, partly because of the instrumentation, they’re very good at building a melancholy mood. Nothing too dark, but it’s there, all the same.

“Square One” plays like a proper album should. It flows beautifully, one track to the next, and the quality of the material never wanes. Opening tune “Sucker for Your Smile” outlines their approach. Keys and guitars combine, and there’s a hint of Lloyd Cole’s Commotions or third album Television in the delivery. This is definitely pop music, but it’s the good stuff, and worth getting excited about. “Draw Me Closer” begins like an old Chris Isaak song before other soul-rock influences come into play, and a pristine guitar solo opens the door. “Pretty Complicated” is jazzy and upbeat, “Rub It In” features some great Traffic-like flute, and final flourish, “Trust in You”, wraps things up in fine style.
www.sugarbeat.nl
www.facebook.com/livepoetssociety.nl
www.soundcloud.com/live-poets-society
Simon M.