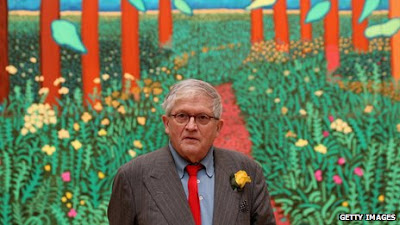 A gallery in David Hockney's home town of Bradford is asking people who met him at the start of his career to dig out works of art or pieces of memorabilia for a new exhibition.

The show at the Cartwright Hall gallery will focus on his early life and work.

Hockney was born in Bradford in 1937. As a teenager, he would use a pram loaded with paints and brushes as a mobile art studio on the city streets.

He went on to find fame at the Royal College of Art in London in the 1960s.

A major show of Hockney's landscapes at the Royal Academy earlier this year, titled A Bigger Picture, attracted more than 600,000 people.

Cartwright Hall is asking Bradford residents to take items including paintings, drawings, photographs and Christmas cards to a drop-in day on Wednesday 26 September between 11:00 and 15:00 BST, or to contact curators directly.

The gallery said it hoped the exhibition, which will run from December until next April, would be "a truly, uniquely Bradford exhibition".

Hockney studied at Bradford College of Art in the mid-1950s.

Cartwright Hall's collection includes Hockney's Bolton Junction, Eccleshill, which was painted while he was at art college and which was featured in the Royal Academy show.

"It's therefore fitting that this exhibition will have a local perspective with valuable contributions from the district's residents."