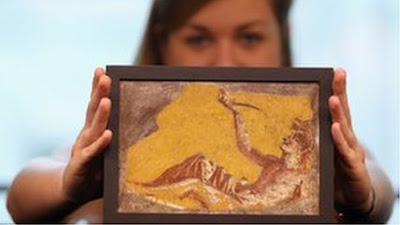 More than 250 archaeological remains from the lives of people in the Roman cities of Pompeii and Herculaneum will feature in a new exhibition at the British Museum next year.

The two cities on Italy's southern coast were buried following the eruption of Mount Vesuvius in AD79.

The exhibition will include casts of some of the volcano's victims.

The British Museum said it will explore "real" Roman people, not the emperors and gladiators portrayed in films.

The event will be the first about Pompeii and Herculaneum in London for 40 years and will bring together recently discovered objects and finds from earlier excavations, many of which have never been seen outside Italy.

Museum director, Neil MacGregor, said the exhibition has been possible following a collaboration with the Archaeological Superintendency of Naples and Pompeii, "which has meant extremely generous loans of precious objects from their collections, some that have never travelled before".

Furniture in the exhibition includes a linen chest, a garden bench, and a baby's crib that still rocks on its curved runners.

The famous casts show victims of the volcano in Pompeii, including a family of four huddled together in their final moments, and a dog "fixed forever at the moment of its death as the volcano submerged the cities".

Life and Death in Pompeii and Herculaneum will open on 28 March and run until 29 September, 2013.