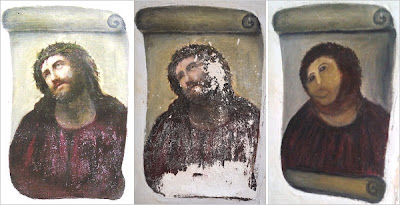 The woman who ruined a prized Jesus Christ fresco in Spain is now demanding royalties after her botched restoration became a hit with tourists.

Lawyers for Cecilia Gimenez, who is in her 80s, say any "economic compensation" would go to charities.

She made headlines after her do-it-yourself restoration in a church left the 19th Century fresco of Christ resembling a hairy monkey.

But thousands of people have since visited the church near Zaragoza.

The airline Ryanair is now even offering deals to the north-eastern Spanish city, encouraging tourists to see the fresco in the Sanctuary of Mercy Church in Borja.

"She just wants (the church) to conform with the law," said Enrigue Trebolle, Ms Gimenez's lawyer.

"If this implies an economic compensation, she wants it to be for charitable purposes."

The lawyer added that Ms Gimenez was favouring charities helping patients with muscular atrophy, because her son suffered from the condition.

Ms Gimenez earlier said she had decided to restore the work by Elias Garcia Martinez because of its deterioration due to moisture.

She claimed to have had the permission of the parish priest to carry out the job.

"How could you do something like that without permission? He knew it!" she was quoted as saying.

But during the restoration, the delicate brush strokes of Elias Garcia Martinez were buried under a haphazard splattering of paint.

The once-dignified portrait now resembles a crayon sketch of a very hairy monkey in an ill-fitting tunic.

Ms Gimenez appears to have realised she was out of her depth and contacted the city councillor in charge of cultural affairs.

Cultural officials said she had the best intentions and hoped the piece could be properly restored.