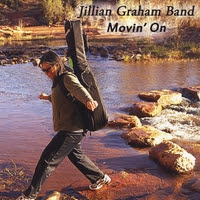 Jillian Graham began singing in choirs as a child, but as with so many, adolescence brings new interests, and before long real life takes over. Her rediscovery of music began in earnest in 2006 when she bought herself a guitar, and began learning chords and writing songs. She met her husband Jim Graham (a professional bass player), and in 2009 they formed the band.

A quick glance at their concert resume indicates a band who hit the ground running, and one that quickly earned a reputation amongst gig-goers, as regular shows throughout the Pacific North West, New England and as far afield as South Korea surely confirms. They’ve yet to make it to the UK, but on the evidence of their debut recording, I’m sure there’s an audience here ready and waiting.

What instantly apparent is they don’t rely on any single style. Folk, rock, pop and blues all play their part, and Graham’s rich alto voice provides a continuous tread throughout the album’s 14 tracks. She’s certainly unafraid to wear her heart on her sleeve, and it’s this vulnerability and openness, combined with a lyrical lightness of touch that provides much of their appeal. That and some fine chops – the band all provide superb support, propelling the songs along in a most agreeable fashion.

Highlights are plenteous: “Some Days” comes out of the traps slow and purposeful, and when the band kicks in it’s big grins all round, and the more demonstrative may feel the need for an air punch. “You Mean the World to Me” is just a delight, and when Graham’s singing songs for her parents, “Find Me” and “I Wish for You”, she hits emotional highs while cleverly avoiding the mush.
www.facebook.com/pages/Jillian-Graham-Music
www.reverbnation.com/JillianGrahamMusic
Rob F.