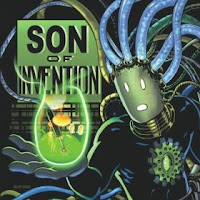 I’ve read the Son Of Invention’s Facebook biography twice now and it’s the most convoluted band history I’ve ever come across. Basically, two bands, The Last Lighter (from Kansas City) and The Feinting Room (from San Francisco) got together and made Son Of Invention. The process took eight years, and if you feel you need to get intimate with the details, they’re all sitting online waiting for you. Although, to be honest, you’re probably better off going straight to their music page, especially if grungy, tune-laden psychedelic rock floats your musical boat.

First impressions are important, and Son Of Invention’s eleven-track debut makes an instant impact. “I Steal From Them” melds a heavyweight metallic riff with a cool, unruffled vocal; fans of Smashing Pumpkins circa “Siamese Dream” will get it straight away. “White Horse” swims in a hazy electric current, stoned but never sludgy, it inhabits a parallel consciousness where Blind Melon guys are revered and ‘90s alternative rock reached its full potential instead of imploding. “Space Guy” is pithy and proud and sounds like a hit single waiting to happen, and “A Song in the Wood” is positively mellow until guitar muscle is flexed with a series of ramshackle power chords. All good stuff, but it’s the way they take space-rock influences from the ‘60s and ‘70s, Pink Floyd in particular, without losing sight of their songs that impresses most. They maintain a sharp pop edge wherever the guitar effects lead, ensuring they remain wholly accessible – it’s a neat trick, and one they repeatedly pull off. I like it a lot.
www.sonofinvention.com
www.facebook.com/sonofinvention
Simon M.