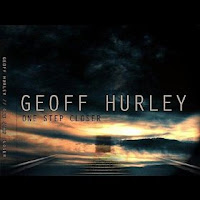 There’s a photo of Geoff Hurley on the front page of his Facebook profile where he looks the spitting image of Paul McCartney, so perhaps it’s appropriate that his solo debut album “One Step Closer” is chock full of Beatle-esque power-pop and melodic radio-friendly rock. Also, in a career where he’s written and produced for high profile artists like Mary Wilson and Shalimar, and shared stages with Muddy Waters and Creedence Clearwater Revival, it’s high time he took the leap and released his own record. For the album, he’s joined by a full band of musicians, including Peter Storm on lead guitar; Gary Strausbaugh plays keyboards and co-produces, and bass players Joe Salamone and Rich Kurtz alternate their services. Although there’s not a household name amongst them, they all provide rock solid support, and Hurley’s songs and tunes get to soar.

It’s difficult not to be charmed by Hurley’s way with a rhyming couplet and a needle sharp hook. Lead single “Something Going On” lays out his stall from the outset. Pristine guitar pop is often underrated, but when it’s done well, it seems almost timeless, and here it’s done very well, indeed. Elsewhere on “One Step Closer” Hurley continues to hit highs; “I Need Somebody” reveals a Byrds / Roger McGuinn influence and “Anyone Can See” slows the pace without sacrificing an ounce of pop nous. Things are brought to a fitting conclusion with the six-minute “Calling Out to You”, its debt to post-Beatles’ pop is undeniable, which is good news for fans of Badfinger, ’70s FM radio, “Ram” and “All Things Must Pass”.
www.geoffhurley.com
www.facebook.com/geoffhurley.band
Rob F.