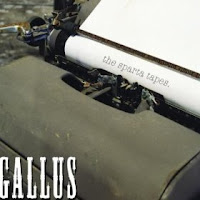 ‘Gallus’ is an old Scottish slang word, which has a few meanings, depending where and how it’s used. In essence it means mischievous, but can vary from a wee bit cheeky to downright menacing. The question is: where do Gallus the band come on the scale of rascalism? They’re certainly no shrinking violets, and on their debut offering, they fuse rock and Americana in a genuinely refreshing way. They groove like the best cosmic country bands of the past, but they habitually mix their electric guitars high and feisty. They open with “Trash Can Love”, which shares a vibe with David Crosby’s “If I Could Only Remember My Name”. That’s a very good thing, and although it’s not a feel they recreate too often, there’re still plenty of good things happening.

Main man Chris Kelly spent six years writing the songs on “The Sparta Tapes” and then found a rock band to play them. He chose well; the balance created suits the material very well, and they’ve managed to fashion a collection that’s both abrasive and comforting. Apart from the first track, sterling material is plentiful; “Moment in Time” is literate and clever, not unlike TV Smith fronting Wilco and “Down to My Level” and “Waiting for the Fire” are anthemic but never bombastic or pretentious. At their most grand they’re reminiscent of an American Big Country – in their vital, early days – and when they strip back their songs and hold back on the electricity (see “Single Malt Whisky”), they’re almost “Nebraska” intense. If there’s any criticism to be laid at their door, then perhaps the production is a little back-to-basics, but it’s really not a problem and it doesn’t detract from what is essentially a fine debut.
www.facebook.com/gallusmusic
www.gallusmusic.bandcamp.com
Rob F.