Review: Junior Smalls and the Criminals – We Make Our Dead Friends Saints 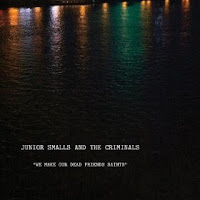 Junior Smalls musical upbringing was both varied and probably unique. As a child he was enamoured with groups as disparate as The Smiths, Public Enemy, The Cure and Dinosaur Jr. He spent his teenage years in various punk and hardcore bands, before becoming an in-demand hip hop producer, most notably working with Afroman, and regularly touring with him. In 2009 he got together with a few old musical friends to form Junior Smalls and the Criminals, and they released their debut long-player a year later to some acclaim – especially from us. Needless to say, it’s a pleasure to welcome them back with “We Make Our Dead Friends Saints”.

Only six tracks this time, but fingers crossed there’s a full-length album in the pipeline, Smalls and his band incorporate an acoustic, folk edge to their post-punk method. The new approach puts an emphasis on their songs, which more than hold their own, and they retain their rock credentials through fiery playing and a Replacements-esque buzz. The title track’s a doozy; raw and passionate, it more than lives up to its eye-catching title. “Alone Again” leans on Smalls’ Cure infatuation; it’s played with real heart and gains extra credit for its whistled intro. “Cold Shoulder” may be my favourite. It’s unapologetic folk-rock, delivered with all the crackle and spark that you’d expect from ex-punks with a point to make.
www.juniorsmallsandthecriminals.com
www.facebook.com/juniorsmallsandthecriminals
Rob F.