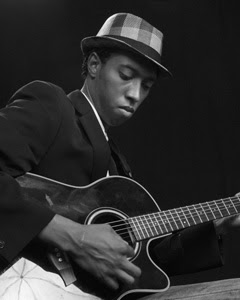 Leicester Bangs: Tell us a little about yourself.
Erick: I've been performing publicly as a solo artist since 2009. I started out by basically performing at various open mics. My "regular" job was as a teacher for the last two years as well, so I really only had time to perform during the summer. I've now taken the plunge and dedicated myself to music, so I'm looking to perform a lot more than I've been able to previously. I told my students that I was pursuing my dream and told them that when they grow up they should follow their own dream. Everything I do is dedicated to my students and showing them that it is possible to live your dream no matter what.

LB: How did you start out making music?
Erick: Music has been on / off relationship for most of my life. In elementary school I played the violin for two years, then stopped playing music until I got to college. I then learned how to play the guitar, started studying music, and eventually joined the college Gospel choir and began to sing. A few years later I began to write my own songs and perform them.

LB: Who did you grow up listening to and how do they influence what you’re doing now?
Erick: I was inspired to sing by watching Elvis Presley's performance of "Hound Dog" on an old History of Rock and Roll video. So he definitely is an influence. When I began singing I would sing along to Frank Sinatra and Nat King Cole songs, because they had the same vocal range as me. Bob Dylan, John Lennon, and Cole Porter influenced my writing style. I hope to one day be as good as my influences.

LB: Tell us about your latest release.
Erick: My two latest releases are "My Tortured Anima" CD and "Fire of Love" MP3 single. I wrote the songs in 2010. The songs basically sum up my inner conflicts of the last two years. The word "Anima" is a psychological word from Carl Jung meaning the feminine / creative side of man. That creative side of me has undergone a lot the last few years.

LB: Do you get out and play your music live, and if so, what can an audience expect at one of your shows?
Erick: I try to go to different open mics every week. My singing style is very direct and emotional. My guitar playing isn't fancy because I concentrate mainly on expressing myself vocally the best way I can.

LB: What aspects of playing and recording music do you most enjoy?
Erick: I enjoy the unpredictability the most. The feeling of "living in the moment" affects the way I sing. I can never sing the same song the same way. The way I sing is defined by the moment I'm in, so it's always different. That's what makes it exciting.

LB: Where can people find (and buy) your music?
Erick: People can order my music from my website or at CD Baby (links below)
www.RavenworksProductions.com
www.cdbaby.com/Artist/ErickRaven