Review: Flanagan Smith – All The Cars My Friends Stole

Flanagan Smith – All The Cars My Friends Stole (Independent) 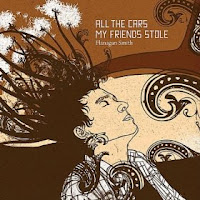 Back in the old days, they used to call artists like Flanagan Smith all-round entertainers. Unfortunately that’s a label that came with some cheesy connotations, though all it really meant was an abundance of talent. Smith is a singer-songwriter, actor and writer, which isn’t at all cheesy. In fact, I’d go as far as saying it’s pretty cool.

In 2005 Smith moved to New York to concentrate on his music, and “All The Cars My Friends Stole” was his debut EP release. It’s been around in one form or another since the spring of 2010, but it’s been re-released this summer. Smith’s songwriting stylistically tips the nod to Warren Zevon and the early albums of Tom Waits’; in the way he uses humour, without it getting in the way of gritty scene setting and darker, almost noirish moods.

Though entertaining and a trifle eccentric, he tells an interesting tale, never failing to unearth the details that convince. “Souls Are Diamond” is lyrical and literate, the sort of song that made Elliott Murphy such an interesting proposition when he first appeared. “Roll On W. Yr Love” is upbeat, funny and touching, and the duet (sorry - I don’t know the name of the female singer) “I Will Call You Friend” is poignant and pretty.

Only seven tracks long, and recorded live, the good news is, between theatre and writing projects, he’s in the studio recording a full-length album. Personally, I can’t wait.
www.flanagansmith.com
www.facebook.com/Flanagan-Smith
www.flanagansmith.bandcamp.com
Rob F.