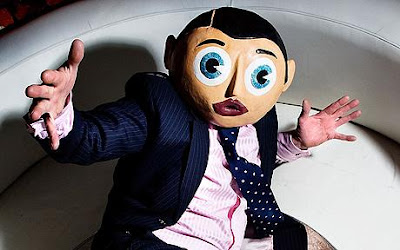 Michael Fassbender will portray a character "inspired by" late comedian Chris Sievey's papier-mache-masked alter ego, Frank Sidebottom, in a fictional new film titled 'Frank'.
Following rumours that the 'Shame' actor would play a straight, biopic-style version of Sidebottom, the movie's screenwriter Jon Ronson felt obliged to clarify via Twitter: "The film isn't a film about Frank Sidebottom. It's fictional, inspired by Frank but also by other great mavericks like Daniel Johnston".
For the benefit of those who hadn't listened the first time, he added: "It's not a film about Frank Sidebottom! It's totally made up and - whilst inspired by Frank - is inspired by other people too".
So that's all fine, but the real question is, this: will Fassbender's on-screen headgear be at all "inspired" by that papier-mache face? We can but dream. And speaking of dreams, that fund to erect a bronze statue of Frank Sidebottom in Timperley town centre is still just that, a dream.