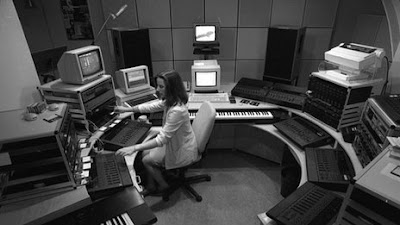 The BBC's Radiophonic Workshop, which created theme tunes and sound effects for programmes including Doctor Who and Blake's 7, is to reopen after 14 years.

Composer Matthew Herbert, known for his use of "found sounds", has been appointed creative director.

One of his first commissions is a "sonic memorial" to the BBC's Bush House building which, until recently, was the home of the World Service.

The original workshop was known for its pioneering use of electronic sounds.

Founded in 1958, it was best-known for creating the eerie swoosh of the Doctor Who theme tune, but its compositions were also used in numerous radio dramas, The Goon Show and The Hitch-Hiker's Guide to the Galaxy.

As well as music, the workshop created sound effects - from champagne corks popping to the distorted, strangulated voices of the Daleks.

While the first workshop was based in the BBC's Maida Vale studios, the new incarnation will live online, at The Space, a new digital arts service developed by the Arts Council and the BBC.

Herbert will lead "seven fellow cutting-edge collaborators" in making new sounds and music.
The composer is known for his experimental sound collages, which often have socio-political themes.

On last year's One Pig film and album, he recorded the life of a pig from birth to its slaughter at 20 weeks, and its subsequent serving as a meal.

In a live performance at 2004's London Jazz Festival, he drove a tank over a replica of a meal Nigella Lawson had cooked for Tony Blair and George Bush.

More conventionally, he has worked on records at the innovative edge of pop, including Bjork's Vespertine album.

His first work for The New Radiophonic Workshop takes audio from 25 previous projects featured on the website - from theatre performances to poetry readings - creating a "curious murmur of activity".

It can be heard by clicking on a button labelled "listen to The Space" at the top of any page on the website.

"It is the perfect time for the rebirth of the workshop," he said.

"The rapid pace of change in technologies has meant our imaginations are struggling to keep up.

"By bringing together the people making the technology with people making the music, we are hoping to find engaging answers to some of the modern problems associated with the role of sound and music on the internet, in certain creative forms and within broadcasting."