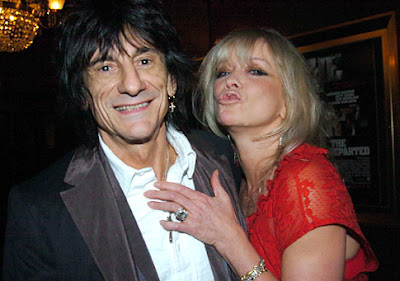 Rolling Stone Ronnie Wood has said he is "staggered" and "shocked" by a sale of art and memorabilia, organised by his former wife Jo.

Rolling Stones tour outfits and a custom Fender Stratocaster are among the lots being offered at auction in Los Angeles next month.

Wood said some of the items were "clearly his personal belongings" and that he had no involvement in the sale.

The couple's divorce was finalised in 2011, after 24 years of marriage.

Julien's Auctions in Beverly Hills announced on Wednesday that Jo was putting band memorabilia, which she had collected over the years, under the hammer as part of the sale, which is expected to raise up to $500,000 (£388,000).

Should it go ahead, the auction will benefit MusiCares, the Grammys charity that offers recovery to people in the music industry.

The collection features memorabilia spanning four decades, from the guitarist's work with the Rolling Stones, his earlier association with Faces and his solo career.

Antiques, furniture and art from the Woods' former home in Surrey will also be included in the forthcoming sale.

Darren Julien of Julien's Auctions announced the sale, saying: "They are still very good friends and they just decided it was time to simplify and sell some of their property."

But Ronnie Wood later released a statement through his publicist, saying he had declined the offer to participate.

"He is therefore shocked and disappointed that this auction is being misrepresented as a joint sale. This is not the case."

The statement continued: "Ronnie feels saddened that Jo has taken this course of action and wants the public to know he has not teamed up with Jo on this outrageous sale."

Jo Wood and her representatives were not immediately available to respond to the statement.

Wood, 65, has been focusing on his art career of late and opened an art show in April entitled, Faces, Time and Places in New York.

He also fronts programmes on Absolute Radio and the Sky Arts Channel that have him chatting and "jamming" with fellow musicians.