Review: Milkman Daddy – Leave It On The Porch

Milkman Daddy – Leave It On The Porch (Independent) 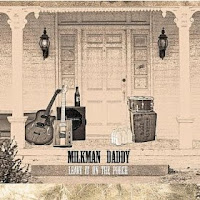 Milkman Daddy is a five-piece Kansas City band led by singer-songwriter-guitarist Tim Covey. Though Covey takes sole responsibility for the songs, their debut is a true band effort, and they confirm as much in their Facebook biography: ‘Tim writes the songs but the other members make them sound so good’. They also describe themselves as a rock band, though ten years ago they’d have been labeled ‘alt. country’, and these days ‘Americana’ seems to be the fashionable moniker for North American bands / artists who mix up their folk, roots-rock, blues and old-time country influences.

There’s a feel of early Jayhawks in what they do, insofar they marry a laid back, rough-round-the-edges vibe with tunes that lodge deep in the subconscious. It’s an engaging combination, and Covey and the band repeats it time and again on “Leave It On The Porch”. Standout songs come thick and fast: “By the Window” utilizes some forceful piano chops to make its point, “Sorrow of You” is sad and distraught but packs a hefty Jackie Leven-esque punch. Elsewhere, “Nothing Stays” seems to be a paean to his hometown, though scattered with loss and some sadness, while “Kansas City Gives Me the Blues” provides some detail.

When alt. country / Americana broke big a decade or so ago and we all subscribed to No Depression, I was a big fan. If Covey and Milkman Daddy had been around then, there would have been UK tours, Bob Harris sessions and Uncut would have been writing rave reviews. It’s trickier these days for bands and their audience, but it’s reassuring to know there are bands like Milkman Daddy still out there, and all we’ve got to do is find them.
www.facebook.com/milkmandaddy
Rob F.