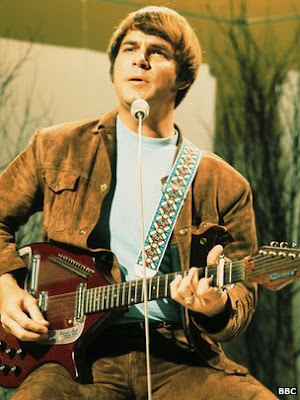 Joe South, who wrote hits including Games People Play and (I Never Promised You) A Rose Garden, has died following a heart attack, aged 72.

South penned dozens of songs in the 1960s and 70s for artists as diverse as Elvis Presley and Deep Purple.

He was also a renowned guitarist, who played on Aretha Franklin's single Chain of Fools and Bob Dylan's Blonde on Blonde album.

The musician died on Wednesday at his home in Buford, Georgia.

Born Joseph Souter in Atlanta on 28 February, 1940, he began playing guitar when he was about 11.

By his late teens, he was appearing on local radio stations as a country singer, and he joined Nashville producer Pete Drake's band in 1957.

The following year, he recorded a novelty single, The Purple People Eater Meets the Witch Doctor, and became a session musician in Nashville and at Muscle Shoals - where he rubbed shoulders with Dylan, Franklin and Wilson Pickett.

During the 1960s, he began songwriting in earnest, and asked his room-mate Billy Joe Royal to sing on some demos.

Those recordings, produced by South, included Down In The Boondocks, I Knew You When and Hush, which was to become a hit single for Deep Purple.

His idiosyncratic style melded country and pop, drawing on singer-songwriters like Dylan and, increasingly, the psychedelic flourishes of the Beatles.

He won two Grammy Awards - for song of the year and best contemporary song of 1969 - for his single Games People Play.

The same song was his sole UK hit, reaching number 6 in March 1969.

"The Grammy Awards are a very nice gesture by the record industry, but they can really mess up your head," South told the Los Angeles Times in 1970.

"The Grammy is a little like a crown. After you win it, you feel like you have to defend it. In a sense, I froze. I found it hard to go back in to the recording studio because I was afraid the next song wouldn't be perfect."

He scored further hits in the US, including Walk A Mile In My Shoes and Don't It Make You Want To Go Home - but his biggest success came via country singer Lynn Anderson, who recorded a new version of his album track (I Never Promised You) A Rose Garden in 1971.

With a more uptempo arrangement than the original, it became an international hit, reaching number one in the US, number three in the UK, and earning the writer a further Grammy nomination.

However, the singer's success was overshadowed by the suicide of his brother, Tommy Souter.

South took several years off, moving to Maui and living in the jungle, and friends said he never truly recovered.

Drug abuse marred his career, and his first marriage ended in divorce.

He made a brief return in 1975 with the Midnight Rainbows album but retired from recording and performing soon afterwards.

The singer eventually went through drug rehabilitation and married his second wife, Jan, in 1987.

He was inducted into the Nashville Songwriters Hall of Fame in 1979 and The Georgia Music Hall of Fame in 2003, according to the Lowery Music group, which worked with him throughout his career.

Butch Lowery, president of the company, called South, "one of the most prolific songwriters of our time".

"He'd just really started to enjoy life," she said. "But he was still working. He'd just had a song released in Australia."

The singer is survived by his son and granddaughter. A funeral will be held in Atlanta on Saturday.