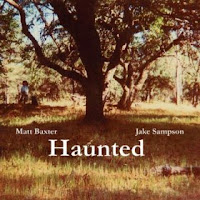 Based in San Francisco, I’ve no idea how Matt Baxter and Jake Sampson got together, but I’m pleased they did. Over the years Baxter has worked with a vast array of artists, both on stage and on record, from Prince Buster and Longhorn Slim to Procol Harum’s Gary Brooker and Donnie Osmond. The list is almost endless. Sampson is an established bluesman with several acclaimed albums under his belt.

Together on “Haunted” they keep things simple and direct. They’re both exceptional musicians, and Sampson possesses a voice that’ll remind many listeners of a young John Lee Hooker or Taj Mahal. A native of Detroit, there’s not too much evidence of a Motown upbringing, though it’s an album that isn’t short of other attributes. Both of them are on great form, and the best of the material on “Haunted” is some of the finest contemporary folk blues you’ll hear anywhere. Baxter’s dobro playing adds another dimension, and on songs such as “Dusty Mule” and “Same Old Pain” they’re nothing short of a match made in blues heaven. I hope they find their way to the UK soon.
www.mattbaxter.com
Tony S.