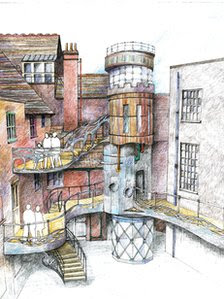 The directors of a £11m project to create a story museum in Oxford have submitted an application to the city council for planning permission.

They intend to renovate three buildings around a central courtyard on Pembroke Street, called Rochester House.

The Museum's curator, the poet Michael Rosen, is currently helping decide how the exhibition spaces will be filled.

But it promises to "celebrate stories in all its forms" with a range of displays and performance spaces.

The museum said it will build its collection around the world's most popular and enduring stories.

The plans include show exhibition and performance spaces, learning and creative play areas, a "fantasy library", cafe and shop.

The initial work will include upgrading the existing buildings but some of the details like rooftop walkways and a look-out tower will be completed once the museum is open, following further fundraising.

The museum was due to open in 2014 but was postponed after the city failed to become Unesco World Book Capital City.