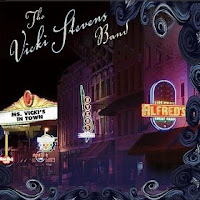 The Vicki Stevens Band is an Oregon-based, classic RnB band. The talented quintet feature the titular Ms. Vicki Stevens, a powerhouse, award-winning vocalist, with a voice custom-tuned to sing the blues, songwriter and multi-instrumentalist Bill ‘Froggy’ Hyland and guitar whizz Dennis Monroe. Bassist Jim Badalich and drummer Ron Rocci complete the line-up. They’ve been gigging since 2008 and this is their debut album, an eleven-track feast of rockin’, soulful, hard-as-nails blues and traditional American rock.

The majority of the material they present for our delectation was penned by Hyland, and he’s got a great feel for his chosen genre. It’s done justice by the band who rip through his songs of cheating and lies, violence and retribution. Especially agreeable is the tandem pleasures of Ms. Vicki’s soul-flecked vocal and Monroe’s blazing guitar.

There are plenty of highlights to talk about. The title track’s a huge statement of intent with the whole band stepping up to the mark and making their presence felt. Monroe’s “Crazy 'bout My Baby” allows Ms Vicki free rein to express her womanly desires, while the guitarist gets to play slow and stealthy, and then there’s the seven-plus minutes “Tell Me the Truth”. It’s about a woman wronged and the murderous things she’s prepared to do to hear the truth. I may the finest advert for honesty ever set to music.
www.vickistevensband.com
www.facebook.com/TheVickiStevensBand
Rob F.