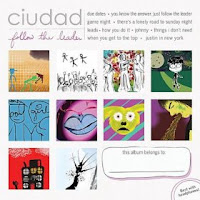 The fifth album from Philippine band Ciudad continues their exploration of all thing indie and pop. It can’t be easy reaching a worldwide audience when you’re based in Manila, but on this evidence, they deserve whatever success comes their way. One can only hope that talent and charm will eventually win out, and they’re already making inroads. Their fourth album “Bring Your Friends”, released in 2008, was hailed a masterpiece by the Philippine music press, and “Follow The Leader” will, without doubt, enhance their reputation. The band’s intrinsic tunefulness, their clever songwriting and readiness to experiment, without sacrificing a shred of accessibility, will surely stand them in good stead.

Principle songwriter Mikey Amistoso, together with his bandmates Justin Sunico and Mitch Singson, repeatedly pull out all the melodic stops. “Due Dates” provides a near perfect start. Delightfully twee yet packing a real pop punch, its hugely addictive tune and lyrical twists and turns bring to mind the Beach Boys, Mo Tucker’s VU, Sean Lennon, Sarah Records and a host of C86ers. When you think it can’t get any better, the magnificently monikered Jazz Nicolas weighs with a faultless keyboard coda. As with the remainder of the record, it feels ideally suited for lazy summer days and may just make a Northern European winter a little less grey. Further highlights are plentiful, and it would be remiss to sign off without mentioning a couple of them. The title track utilizes an amiable female backing vocal courtesy of Marie Jamora, and brings to mind The Dandy Warhols, though not as punky, it’s just as appealing. “When You Get to the Top” rolls along with plenty of bite to Amistoso’s words, and guitarist Sunico builds riffs aplenty. Great stuff.
www.facebook.com/Ciudad
www.ciudad.bandcamp.com
Rob F.