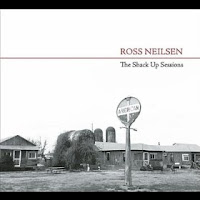 Recorded in Clarksdale, Mississippi at the Shack Up Inn, an old plantation, housing a collection of sharecropper shacks, farmhouses and outbuildings. Its location, just three miles from Robert Johnson’s legendary ‘crossroads’ (the intersection of Highways 49 and 61), it might just be the finest place on earth to record an old school blues album.

After releasing a trio of band recordings, this is Ross Neilsen’s first full-length solo album and it’s a natural extension for an artist who regularly performs in a solo setting. Its mix of classic material and original songs is a common enough format on many a blues album, but thanks to Neilsen’s distinctive style and a production that is hardly hi-fidelity, but perfect, nonetheless, it sounds novel and fresh.

All those live shows, up to 200 dates a year, must have been good practice for “The Shack Up Sessions”. Recorded in just two days, the exigency and urgency just blasts through to the listener. Versions of “Can't Be Satisfied” and “Spoonful” fizz and spark; the latter featuring a sliding blues chug that should awaken the hairs on the back of the neck of the most jaundiced blues fan. The insistent walking bassline of “Goin' Somewhere” will raise a knowing smile or two, and it’s surely fitting that he closes the collection with “Blues At Midnight” and the ominous sound edit “49/61”.
www.rossneilsen.com
www.facebook.com/rossneilsenmusic
Rob F.