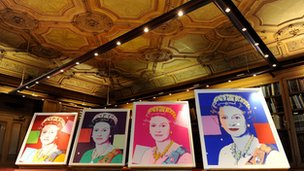 A set of limited edition prints of The Queen by the artist Andy Warhol are to go on display at Windsor Castle.

The four brightly coloured images were acquired by the Royal Collection in May and will be exhibited in The Queen: Portraits Of A Monarch from November.

A limited run of 30 sets of the "Royal Edition" prints were made, coated with particles of diamond and crushed glass.

Ms Roberts said: "The Warhol prints of the Queen are in many ways the most important popular image of the Queen to be created by an artist print maker over the last few decades.

"What Andy Warhol did with print making was very new, and particularly in these images where he uses the same outlines and applies different colourways to it, which is something very personal to him. It's playing around with an image in a way which is entirely new."

She added: "Warhol produced these prints in these different colourways with the intention that they should be seen together as a set, reacting off each other."

The new exhibition at Windsor Castle presents the paintings alongside a selection of official, commissioned and formal portraits of The Queen from her six decades on the throne. It will continue until 9 June next year.