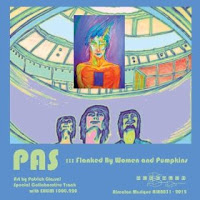 PAS (Post Abortion Stress) are “experimental sound technicians” from Brooklyn, New York, who were formed in 1995 and are led by Robert L. Pepper. For “Flanked By Women and Pumpkins” they’re joined Amber Brien, Michael Durek and Jon Worthley.

Recycling and reworking is at the heart of the material, the album having been conceived, formulated and informed by their April-May 2011 tour of Poland. Ideas were further developed and completed in the studio, and on the impressive “Incredible Day For Natives” samples of an improvised jam with underground icon Philippe Petit were used.

PAS utilise a host of traditional instruments, samples, and available technology to produce an industrial cyberspace sound collage featuring electronic ripples and oscillations, and remote tribalism and radio waves. As a whole, traditional song structures are quite well avoided, with the rare exception of the elegant atmospherics of “It Is Is It?” which has an almost David Sylvian / Japan “Quiet Life” ring to it.

“Vacationing Beat” hits the same nerves as Suicide repetitions, but is swept along by its pleasant post holocaustic windstorm. It’s the occasional inclusion of found bird song, children’s voices or spoken word sample that serves to naturalise or humanize the process.