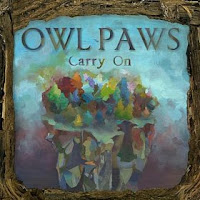 San Francisco’s Owl Paws aren’t big on making biographical information public; apart from a group interest in gravy (it’s on their Facebook page, honest), details are scarce. I know there are four main members, though exactly what they each contribute to the group is a mystery, and that’s about it. Apart from the music, of course.

“Carry On” is their second EP (their self-titled debut appeared in 2011) and it’s a six-track collection of harmonic alt. folk, a genre which has its roots in the ‘60s with groups like CSN, and has zig-zagged in and out of fashion ever since. Currently it’s riding on an all-time high, and the more popular practitioners, from Fleet Foxes to Mumford and Sons, are getting serious chart action. Even those doyennes of good taste, young women, seem to like them.

If Old Paws get their act together, there’s no reason they shouldn’t join the club. They make a quite exquisite sound over these half dozen tracks; faultless boy/girl harmonies, a subtle, warm production, enveloping arrangements and songs that wash over the listener like sunlight. First impressions count, and “Hoot” is as good as any. Perhaps the upbeat “Sunrise” is the star track, but really, there’s nothing in it. Listen, buy, enjoy, etc.
www.facebook.com/Owlpaws
www.owlpaws.bandcamp.com
Rob F.