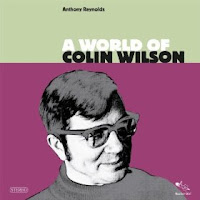 At first glance the sleeve appears to depict William Shatner in a polo-neck and glasses, which should be enough to draw in many a Trekkie or beatnik hipster. The picture is, nonetheless, Colin Wilson, the philosopher / novelist who came to prominence as one of the 1950s “Angry Young Men” of British literature; a contemporary of Kingsley Amis and John Osborne.

For “A World of Colin Wilson” Anthony Reynolds (ex-frontman of the much underrated Jack) pays homage in what is almost a traditional setting of spoken words (of depth and genius) to music - think Kurt Cobain meets William Burroughs. Rather than simply providing backing, Reynolds either explodes snippets, repetitions and passages of recorded conversations and texts of Mr. Wilson into dark and eerie musical constructs, or manipulates his voice to become a sonic textural representation of the music, which is barely audible as words.

The remote and hardhearted atmospheres that are created suit the key existentialist topics of wasted life, death and reality versus the surreal, yet the culminating “The Colour and Light Around Me” with its simmering jazz to trip hop to white funk, and the Bontempi beaten musak of “Keats…Shelley…Elliot…” belatedly lighten the mood somewhat.
www.anthonyreynolds.net
www.colinwilsonworld.co.uk
www.rocketgirl.co.uk
Willsk