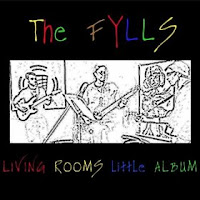 The Fylls debut EP was recorded in the living rooms of various friends and fans – thus the slightly awkward title. Recorded live and with the minimum of fuss, it’s a pleasant enough collection with a lo-fi vibe, which is always amiable and quite charming. The indie-folk duo of songwriter Jordan Roads on vocals and guitar and Erica Robinson on bass and vocals have raised $4000 via a Kickstarter campaign, and plan to use the cash to record and release a debut studio album. “Living Rooms Little Album” serves almost as a thank you to their audience who has supported them thus far, and helps keep the excitement bubbling for the eventual release of their long-player.

The EP begins with “Rabbit Hunting”. Both Roads and Robinson croon, and they’re backed with a heavily strummed guitar. It’s an effective launch, though there’s better to follow. “Wooden Floors” introduces a percussive element, though nothing that that distracts from the harmonies and Roads’ ear for a killer tune, and “Thread” showcases their musicianship and Robinson’s delicate vocal appeal. As a taster for the new album, forthcoming studio single “Mitochondria” is included as a bonus track. It’s a driving indie pop song with a great hook, and will whet plenty of appetites.

Allegedly there’s a handmade CD copy of  “Living Rooms Little Album” available, though you may have to contact the duo directly. For the rest of us, the download works just fine.
www.thefylls.com
www.facebook.com/thefylls
www.thefylls.bandcamp.com
Simon M.