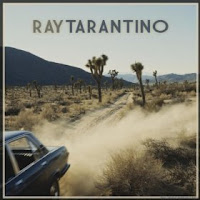 Born in Italy, raised in England and now resident in Tennessee, Ray Tarantino certainly brings a wealth of life experience to his songs, including academia, well paid employment and a near death experience behind the wheel of an expensive BMW. It was the latter that reignited his creative spark. He released his much-lauded debut album “Recusant” in 2007 and has since played close to a 1000 shows.

Reviewers have compared him to a variety of singer-songwriters, from David Gray to Dylan and Springsteen, but I think there’s enough of himself on his second record to mark him out as his own man, and frankly, he’s got a better voice than all of them. What’s instantly apparent is the seriousness with which he’s approached the project. He’s no bedsit troubadour, dressing up practice room demos as finished product. The songs are arranged meticulously, his band sound well rehearsed and animated, and the production is bright, warm and perfectly realized, allowing the songs and Tarantino’s considerable vocal attributes to take front and centre.

Beginning with “Can't You See”, powerful, rapid percussion drives the song forward at considerable velocity, rocking hard, though Tarantino’s measured delivery balances out the pace. It’s a spectacular start. “Futureblind” slows things down, but the overall sound is still toothsome and full, with the vocal providing the hub, and the band fully understanding their responsibilities. Guitarist Ale Pasini is on particularly fine form. The album continues in this fashion, consistently entertaining and utterly devoid of filler. It’s rare I get to hear an artist so obviously on the edge of major success. It seems the big time is beckoning, and with the right push and some good fortune, we could soon see Tarantino taking on the arenas of the world.
www.raytarantinomusic.com
www.raytarantino.bandcamp.com
Rob F.