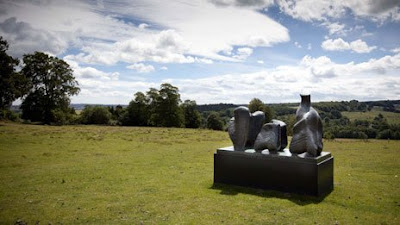 Four West Yorkshire art venues are at the centre of a campaign to get Yorkshire known as the "sculpture capital" of Europe.

The Hepworth Wakefield and Yorkshire Sculpture Park in Wakefield have joined with the Henry Moore Institute in Leeds and the city's art gallery.

New programmes and exhibitions at the venues will be held to encourage visitors and boost the tourism economy.

It is being backed by the Arts Council England and Welcome to Yorkshire.

Yorkshire Sculpture Park, the first of its kind in the UK and the biggest in Europe, opened in 1977. It covers 500 acres and now attracts about 300,000 visitors a year.

As part of programming for 2013, it will host the biggest UK exhibition to date, by British-Nigerian artist Yinka Shonibare MBE.

The Hepworth opened in May and is named after sculptor Barbara Hepworth, who lived in Wakefield until the age of 18.

The largest new gallery outside of London, it attracted half a million people during its first year, exceeding the initial 150,000 target.

This year, the gallery will present the UK premier of a new performance piece by artist Linder Sterling, which will include collaborations with Northern Ballet, British fashion designer Pam Hogg, and musician Stuart McCallum.

Gary Verity, chief executive of Welcome to Yorkshire, said part of the campaign would be to signpost visitors to hotels, bars and restaurants surrounding the venues.

"We will make it easy for those tempted, to come to Yorkshire and see some of the best sculpture in the world."