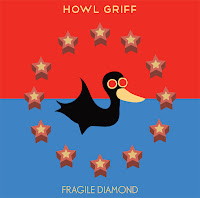 Following their eponymous, Welsh language debut, they switched to English for its follow up, 2010’s “The Hum”. Whatever their chosen tongue, they’ve been lauded and supported by BBC Radio DJs Tom Robinson and Lauren Laverne (the latter described them as “bloody lush”). Now Howl Griff swing into 2013 with “Fragile Diamond”.

The Anglo-Welsh-American psychedelic rockers (their words) take a fuzzy ‘70s style rock as their centrepiece into which they etch hook-laden melodies, titillate with ‘60s inspired keys and endear with summer-drenched harmonies.

Theirs is a varied palette and as such it seems to draw influence from a wide variety of sources. It’s easy to hear shades of Barclay James Harvest (“Puppet Operation Time”) here and a touch of Cream (“Everything”) there.

The title track is an absolute classic which recalls the more upbeat side of both Belle & Sebastian and Lindisfarne, “Radio Revolution” has an arena sized folk rock sound, “Meet My Maker” majestically tells of singer Hywel Griffiths’ experience of going blind whilst driving in the fast lane on the M4 and “International Dateline” is heartfelt indie-pop magic.
http://www.dockrad.com/
http://www.howlgriff.com/
Willsk