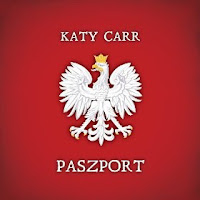 London based performer / singer-songwriter (and fluent Polish speaker), Katy Carr has performed in a variety of settings from The Royal Opera House to Glastonbury music festival, has appeared regularly on BBC radio, had many a flattering review in the mainstream and music press, and was nominated for the London Music Award 2012, along with Kate Bush, PJ Harvey, Arctic Monkeys, The Good, the Bad & the Queen, Metromony, Ed Sheeran, Jim Jones Review, The Unthanks and Laura Marling.

Her music is inspired by themes, stories and characters from 1940’s Britain, France and Poland and she plays a vintage Wurlitzer electronic piano, ukulele and banjolele along with her group The Aviators.

“Paszport”, her fourth full length release marks the 1939 Soviet invasion of Poland and is inspired by stories she has gathered from Polish WWII veterans: including members of the armed forces, partisans, resistance fighters, as well people who fought in the 1944 Warsaw Uprising, and survivors of the German Nazi labour and concentration camps, and Soviet detention camps in Siberia.

Her impassioned and eccentric style blends contemporary songwriting with euro-centric folk music, haunting minimalism, the occasional tape recording (a BM597 Spitfire on “Motylek”) and an air of (dark) humour. “Kommander’s Car” recounts the tale of an escapee and is delivered in the spirit of Lily Allen set to an upbeat tempo with emotive strings whilst “Poland Panorama – Panorama Polski” adds a real sense of drama to the proceedings.

Fans of the heartfelt and expressive works of Tori Amos, Kate Bush, Joanna Newsom or Regina Spektor need seek this out.
www.katycarr.com
Willsk