Dawn McCarthy and Bonnie “Prince” Billy, What the Brothers Sang: album out 18th Feb. on Domino 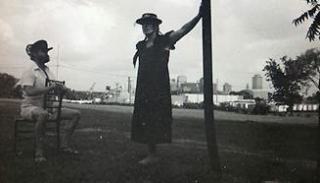 Dawn McCarthy and Bonnie “Prince” Billy, What the Brothers Sang
Album out 18 February 2013 on Domino

As children, the music of The Everly Brothers touched Dawn McCarthy and Bonnie 'Prince' Billy; it touches Dawn's children and the little 'prince' within Bonny today, and makes them dance and sing. The Brothers' harmonies make the hairs stand up - they enervate and inspire. Beyond the visceral impact of any one song, any "So Sad" or "Devoted to You" that rings out from the radio on any given day, there are also the tracks that the Brothers trod over the course of several decades of singing together and making records. They didn't stand still and neither did their songs. And so, What the Brothers Sang is no mere gesture of nostalgia; these new versions rethink The Everly Brothers for the audience of listeners today, people who naturally might have no knowledge or experience with those songs. Why should they? It's not everyone who trawls through the dust of the past for their pleasures. Most of us live today - and so, for today, these songs are made.

What the Brothers Sang is made with deep respect for, is inspired by The Everly Brothers, but it pays tribute by being a record that only Dawn and Bonnie could make, and only in the room with the players that had come to join them. Their duets are a sensuous display of give and take that includes everything that's resonating in the room, every surface that's being pressed or rubbed or hit is a part of the action. Their harmonies are in the tradition, but they are their own, not cutting-on-the-dotted-line of Everly’s magic. These songs make Dawn and Bonnie more themselves. They have their own natural way, and it is infused in every deep moment of every song here.

What the Brothers Sang extols another chapter of The Great American Songbook - for as sure as the tuxedo-clad songs of Broadway and Hollywood were the fodder for several generations' worth of standards, so too were the songs that were written in Kentucky and Tennessee, Texas, Georgia, Oklahoma, Illinois, California and the rest; wherever the songs were written, if they resonated hard enough, they were sung by many. These too are songs for the American Songbook - they inform everything Americans sing today, and at the same time, they are becoming something different; something that will only get stranger as the slow traffic of time pulls away from the days of milk trains, clocks that chime and the rest of the world that The Everly Brothers and all of us came from.

With a great spirit of collaboration, support and exaltation, What the Brothers Sang was recorded and mixed by David Ferguson. The songs were played by Emmett Kelley, Dave Roe and Kenny Malone, with featured players Billy Contreras, John Mock, Dan Dugmore, Matt Sweeney, Pete Townsend, John Catchings, Bobby Wood, Joey Miskalin, Nils Frykdahl, Ian McAllister, Joey Baron, Dr. Chris Vivio, and Noah Tag. This is as fine a bunch of musicians as can be assembled, and their combined session credits include hundreds and hundreds of records - and a stack of number one singles - all of which informed their playing of the great Everly Brothers songs included on What the Brothers Sang.