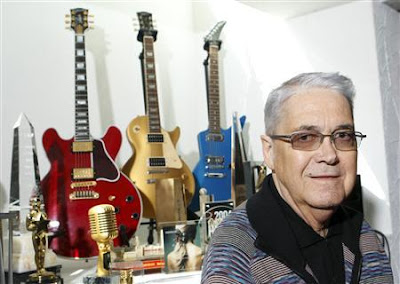 Claude Nobs, who founded the world-renowned Montreux Jazz Festival, is in a coma following a skiing accident.

The 76-year-old "fell while practising cross-country skiing" during the Christmas holidays, said a statement on the festival's official website.

He had surgery in Lausanne, Switzerland, but remains unconscious, the statement continued.

The festival, which takes place on the shores of Lake Geneva, has featured the likes of Miles Davis and Santana.

It was co-founded by Nobs and Atlantic Records president Nesuhi Ertegun in 1967, who booked Charles Lloyd and Keith Jarrett as the first headliners.

Joan Baez arrived on horseback for her debut performance in 1973, while Prince played two jazz-tinged sets to close the 2009 festival.

Nobs even earned himself a mention, as "funky Claude", in Deep Purple's song Smoke On The Water. The song is about a fire that burned down the Montreux Casino, where the festival was held, during a Frank Zappa concert in 1971.

Organisers stressed that Nobs's absence would not impact this year's event, which runs 5 - 20 July.

Their statement ended: "The entire team of the Montreux Jazz Festival wishes a full recovery to its boss."