Review: Mel Annala – In Your Eyes

Mel Annala – In Your Eyes (Independent) 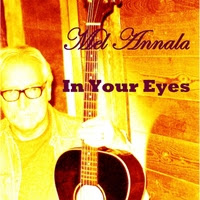 I think it’s fair to say Mel Annala is no spring chicken. I’m not sure exactly of his age but reading his website biography, and doing a few sums, I’d say he’s in his early 60s. Also, from what I can ascertain, “In Your Eyes” is his debut record. I imagine some of you might think that’s a bit strange, but not at all. It’s a common enough phenomenon, which usually involves an early, yet unfulfilled career in music, its near abandonment when responsibilities come along like families, mortgages and proper employment, and a return to music when time and financial pressures ease. So it is here. Annala’s music making goes back to the early 1960s and bands like The Agents and folk trio, The Scarcity Of Time. Over the years he’s kept his hand in, playing in part-time wedding bands, country, folk and bar bands, and in 2006, he set out on his own, playing solo shows with a repertoire of traditional favourites and original folk-rock songs.

I imagine “In Your Eyes” pretty much represents his shows; a mix of well-known material with a smattering of his own songs, and all sung with heart-on-the sleeve openness and warmth. For the most part these are songs that Annala has grown up with and of course, he knows them intimately. He opens the album with the Mississippi Sheiks’ “Sitting On Top of the World”, and he plays it fast and lean. Dylan’s “All Along the Watchtower” retains its drama, as does “Long Black Veil”. Perhaps most surprising of all is his take on “House of the Rising Sun”. Just when you thought it was impossible to do anything new with a song 96% (official made-up statistic) of all guitarists play, Annala manages to make it sound fresh, without doing anything radically different. Of his songs, particular attention should be paid to the title track, which is full of hurt and resignation, and “Dark Disguise”, a Byrds-ian folk rocker with no shortage of hooks and a patented Dylan-esque harmonica solo.
www.melannala.com
www.reverbnation.com/melannala
www.facebook.com/Mel-Annala-Music
Phil S.