Review: Hank Stone – Until I Saw That Train

Hank Stone – Until I Saw That Train (Independent) 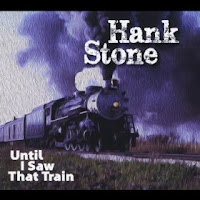 Hank Stone has been writing songs for as long as he can remember – over 40 years – but it was only in 2001 that he began to perform them in public. His debut album (“Rough Folk”) arrived in 2005, and now he’s followed it with “Until I Saw That Train”, a 13 track collection, which will make many listeners wish he’d found his way to the studio sooner.

Though a New Yorker, Stone’s sound seems somehow connected to the South, Texas in particular, and country music troubadours like Willie Nelson and Guy Clark. He possesses one of those lived in, heartworn voices, which won’t win any prizes for purity, but suits his songs to perfection.

“Until I Saw That Train” begins with “Toodle-Oo”, a classic train song, wrapped up in images of hobo dreamers, Kerouac and Cassidy, campfires and cricket choirs, and manages to name check Carl Jung and Van Morrison in a single line. It’s a faultless song to launch proceedings, but it’s far from a standalone moment. The second song to hit the rails “Rattlesnake Train” is just as good, though this time it’s fear and paranoia that propels the narrative.

In between “Phases of the Moon” is nostalgic and wistful, and employs an almost spoken delivery, and “Adam's Blues” is dangerous, dark and oozes atmosphere, and quasi-biblical references. Near the end comes “Sailor's Haven”, where an almost jaunty arrangement disguises some melancholic themes, but he’s not fooling anyone.

If any of the above piques your interest in any way, track down “Until I Saw That Train” and have a listen. You won’t be disappointed.
www.hankstone.net
www.hankstone.wordpress.com
Tony S.