Wilko Johnson: 'Terminal cancer has made me feel alive' 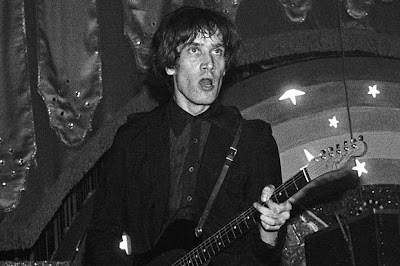 Wilko Johnson has spoken of the strange "euphoria" he has experienced since being diagnosed with terminal cancer.

The former Dr Feelgood guitarist said the news made him feel "vividly alive" - and lifted the bouts of depression he had previously experienced.

But Johnson told Radio 4's Front Row programme he would cancel his planned farewell gigs if he began to feel sick.

The 65-year-old revealed earlier this month that he was suffering from terminal cancer of the pancreas.

He told Front Row's John Wilson: "I noticed the symptoms a few months ago - there was this lump in my stomach. I treated it by ignoring it and hoping it would go away.

"When I went in for the diagnosis and the doctor told me 'You've got cancer' it was quite plain it was an inoperable thing, there was nothing they could do.

"We walked out of there and I felt an elation of spirit. You're walking along and suddenly you're vividly alive. You're looking at the trees and the sky and everything and it's just 'whoah'.

"I am actually a miserable person. I've spent most of my life moping in depressions and things, but this has all lifted."

Johnson explained he was given nine or 10 months to live and refused chemotherapy when it was clear it might only add another two months to his life.

"I just wanna know how long I'm gonna feel like this, which is absolutely fine," he said.

Johnson is due to play four dates in France at the beginning of February, followed by three successive nights at the Greystones pub in Sheffield.

His farewell tour concludes with dates in London, Bilston, Holmfirth and Glasgow in March.

But he admitted: "If the cancer kicks in before that, then I can't go on stage. I'm not going to go on stage looking ill - I don't wanna present a sorry spectacle!

"This position I'm in is so strange, in that I do feel fit and yet I know death is upon me.

"I'm not hoping for a miracle cure or anything. I just hope it spares me long enough to do these gigs - then I'll be a happy man."

While admitting saying goodbye to people was hard, Johnson insisted he did not feel down about his condition.

"I am a feather for each wind that blows and the wind's blowing me this way now. But yet I still retain this marvellous feeling of freedom," he said.

"The things that used to bring me down, or worry me, or annoy me, they don't matter anymore - and that's when you sit thinking 'Wow, why didn't I work this out before? Why didn't I work out before that it's just the moment you're in that matters?'

"Worrying about the future or regretting the past is just a foolish waste of time. Of course we can't all be threatened with imminent death, but it probably takes that to knock a bit of sense into our heads."

Johnson, who also played with Ian Dury's Blockheads and the Wilko Johnson Band, lost his wife, Irene, to cancer eight years ago.

"Right now it's just fantastic - it makes you feel alive. Just walking down the street you really feel alive.

"Every little thing you see, every cold breeze against your face, every brick in the road, you think 'I'm alive, I'm alive' - I hope I can hang onto that.

"I've had a fantastic life. When I think about the things that have happened to me and the things I've done, I think anybody who asks for more would just be being greedy. I don't wanna be greedy."